Which Nitropolis Slot is the Best in Elk Studios’ Series? 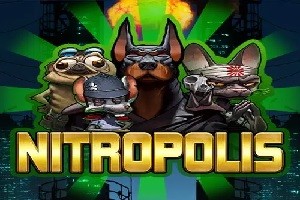 Explore a post-apocalyptic world where four clans vie for control: the Dirty Dawgs, Gritty Kitties, Pug Thugs, and Rogue Rats. The clans constantly compete with one another, each vying to control all of Nitropolis’s precious liquid – the green Nitro that powers the cars.

The Nitropolis series by Elk Studios comprises 3 chaotic slot games, all boasting 6 reels and 4 rows with Nitro Reels and bonus buy features. Let’s dive into the details of each Nitropolis slot and see which one takes home the crown!

Nitropolis offers 85155840 ways to win with Nitro Reels in its 6-reel, 4-row frantic slot machine. Nitro Reels contain two symbol places and hold multiple identical symbols; the more you have, the bigger your chances of winning. All symbols that granted a respin are re-spun until there is a non-winning spin.

You will trigger a special bonus game if you get three or more bonus symbols during the free spins round. Three of these symbols scattered on the reel will award up to 25 free spins, while one symbol is randomly chosen as “scatter pay,” which gives additional chances for prizes!

During the bonus round, all your reels will lock into place, and any symbols that trigger them will stay sticky. The bonus game can be retriggered with additional scatter-paying symbols on these spin rounds!

Nitropolis offers players the option to buy the bonus game feature. As an added incentive, they can purchase either a standard version of this or a more complex super-bonus which has a guaranteed retrigger and an extra scatter-paying symbol.

Sergeant Nitro Wolf is on a mission to clean the city! He’s going to wipe out all of the bad guys in Nitropolis 2. He’s already captured the Rogue Rats, and now he’s on his way to round up the rest.

Nitro Reels consist of 2 symbol places and include 4, 6, 8, or 12 payout symbols. All the symbols and Nitro Reels included in a win respin will continue to be part of future spins as long as new winning combinations occur.

During the free spins bonus game, all Nitro Reels lock in place. The game can be retriggered during free spins.

The slot has a buy bonus feature named X-iter that allows players to choose their favorite scenario and repeat it repeatedly. The feature consists of 5 different game modes: a 5x bet with a guaranteed win to a 500x Super Bonus.

In the Nitropolis 3 slot, Sergeant Nitro Wolf intimidates everyone into fleeing the city in their blimp! Not far south of their former homeland, the displaced tribe discovered a new location to pursue its dog-eat-dog lifestyle!

Green Nitro includes effects that activate NitroReels on the same or adjacent reels. The Redrop feature also activates winnings from right to left. When you trigger Redrop, all current bonus symbols and Nitro Reels remain active.

The Super Bonus Game can be triggered by a combination of bonus symbols and super bonus symbols in an expanded 8-row slot. When activated, this game is played with Both Ways enabled.

X-iter provides a fun gaming experience with 5 different game modes. There’s a wide range of bets—from 2x with double chances to 500x, and 8 rows with Both Ways activated for Super Bonus.

All three Nitropolis slots feature the notorious clans of animals and offer an action-packed gaming experience for players.

The first one in the series, Nitropolis, was a massive hit with 85155840 ways to win with the Nitro Reels feature. The base game offers plenty of action, respins, and two buy bonus features, a standard one and a super bonus one.

Nitropolis 2 took the game up a notch with 12 bonus features, including the Nitro Booster and the X-iter buy bonus. The graphics are similar to the original slot so that’s old wine in a new bottle.

While Nitropolis 3, the final one in the series, makes its entry with a different background where the animal clans have fled the city and are living on an island amidst palm trees and azure skies. The soundtrack also got an upgrade to a peppy, upbeat one.

Nitropolis 3 offers the highest possible payout in any of ELK Studios’ slot games: 50,000 times your bet! It also has avalanches and expanding reels with 11 bonus features in total.

This slot also contains the X-iter buy bonus feature. You can enter 5 different game modes, from which you will have the option of playing for between 2x and 500x your total stake.

Like its predecessors, the Nitropolis 3 slot machine follows the same formula used by Elk Studios. The Nitro Reels game offers payouts in both directions, and two new additions to the line are Nitro Match and Nitro Upgrade.

Offering 50,000 x your total bet per spin, Nitropolis 3 gives 5 times bigger potential wins, making it the most lucrative and the best among the three Nitropolis slots by Elk Studios.