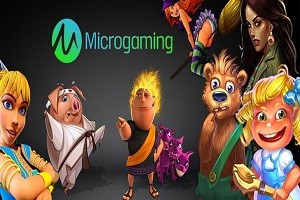 Microgaming is sometimes referred to as the “Godfather of Slots” because the Isle of Man software developer has been pumping out games since the 1990s and has well over 1,000 titles to its name.

The company announced some changes in its composition late last year with the former CEO of IGT International (GTECH/Lottomatica) purchasing almost all of its assets in a private equity deal. The new company, Games Global Limited, has not announced when or if it would rebrand the iconic provider.

Gtech has been around “forever” too, with some historians tracing Lottomatica’s business past clear back to the days of Columbus’s mapmakers – but Microgaming by any other name should retain the title of Godfather for another reason – joining Walter Bugno as CEO was Tim Mickley formerly of Playtech as CFO. It just doesn’t get more “legacy” than that!

The deal announced in November 2021 included not only the game inventory, the Quickfire aggregation network, and the world’s biggest progressive jackpot network (with over 1.2 billion euros paid out so far), but it also included a bevy of known and unknown studios as well as Studio Partners.

Some of those studios are contributing to the overall slot portfolio. Switch Studios produces RNG animated digital table games and Real Dealer Studios signed an exclusive distribution deal for “not live but REAL” games a little while back.

The Games So Far This Month

The month has already seen the release of Alchemy Gaming’s 25,000 Talons – a highly volatile slot that offers up to half a million euros in the wheel bonus. SpinPlay Games’ Vegas Cash followed soon after with double reels and medium volatility.

Keeping up the dizzying pace, the next day, Microgaming rolled out Royal League Spin City Lux from Gong Gaming Technologies. One of the bonus games lets you roll dice to win up to 10,000x.

Tuesday was the day scheduled for Wildfire Wins by Just For The Win. The game is set to feature sticky wilds in the base game and Wildfire respins with sticky wilds and the Wildfire Wheels bonus. The bonus game is triggered by 3 scatters and features three different reels and a potential win of 10,000x.

Crazy Tooth Studios is expected to enter the stream on the heels of that game with Rhino Rilla Rex with 3,125 ways to win. Unlike many “virtual payline” (all pays) slots, winning combinations can appear anywhere on the reels with this game. You’ll want to land creature combos to trigger Team-Up Reels and see symbols combine to create new reels. Mechanics include multipliers, stacks of bonuses for bonus spins, and huge winning potential.

The releases from Switch Studios began on the 11th with Premier Blackjack with Buster Blackjack and will see Auto Roulette hit casinos by the 20th.

Northern Lights Gaming takes the stage on April 25th with Magical Reels and Real Dealer Studios will release Dealers Club Roulette the same day. Pear Fiction will roll out Dungeons and Diamonds by the next day with a jackpot worth up to €250,000!

If you play at a casino carrying Microgaming you should also have seen partner network games like Hacksaw’s Gladiator Legends on the 7th and Khan’s Wild Quest from Booming Games on the 14th. Now, look for Eugenio from MGA on April 25th, Iron Dog Studios’ Wolf Strike on the 27th, and Follow the Honey from Inspired Gaming on April 28th for a rock-solid month of new gambling entertainment.