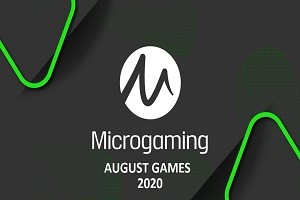 August is well upon us and a new month always means a new exciting line-up of content from Microgaming and its roster of studio partners.

This month, Microgaming and fans of its games will celebrate the return of smash-hit ice hockey-themed series Break Away and the launch of a plethora of some more games with engaging mechanics and characters, including gods of times gone by and mythical creatures.

Microgaming promises that August will be a month of immersive and epic gameplay and from what we’ve seen in the game trailers, the iGaming provider is certainly on track to deliver some epic slots experiences this month.

The August slot bonanza kicks off with the release of Goldaur Guardians on August 11. The game was crafted by Alchemy Gaming, one of the many studios developing content exclusively for Microgaming and its partners.

Goldaur Guardians is a fantasy-themed five-by-three, 20-payline slot with dynamic and high-volatility gameplay. The game arrives with big win potential and deploys Microgaming’s widely popular Hyperspins mechanic. Rolling Reels, Free Spins, and a win multiplier for win potential of up to 7,300x are among the features the game boasts.

Wolf Howl coming up August 18 will invite players to an adventure of a lifetime in the North American wildlife. This fresh five-reel, 10-payline slot was developed by Just For The Win. The game features moon symbols that call the wild wolfpack to unlock wilds with multipliers offering generous win potential up to 25,000x.

New, Updated, Break Away Slot to Join Microgaming’s Games Library
Microgaming is set to welcome a thrilling update of its Break Away classic on August 20. Break Away Lucky Wilds by Stormcraft Studios will layer up action of the original slot title with rewarding features, including three fixed jackpots as well as three free spin modes, each offering a different number of free spins and individual multiplier trails.

Next in line will be 3 Tiny Gods by Foxium, scheduled for networkwide release on August 25. The game is themed around Ancient Egypt’s mythology but harnesses modern age character art for a compelling gameplay.

The game is suitable for players of all experience levels with its five-by-four grid, 30 paylines, and charming characters. Three powerful gods with extreme powers align with the slot’s special features for a chance for players to win up to 5,000x the total stake.

3 Tiny Gods also features a jackpot mini game that enhances the overall experience by offering players the chance to land one of three tiered jackpots.

Microgaming is also set to host a number of exclusive digital slots tournaments to provide its customers with the opportunity to experience its newest game releases.

The iGaming content provider will also add a plethora of titles from its network of content partners, including Ancient Warriors from Crazy Tooth Studio, 243 Crystal Fruits Reversed from Tom Horn Gaming, Viking Reign by Ainsworth, and Lil Devil by Big Time Gaming, among more than 50 new titles planned to be released throughout the month of August.