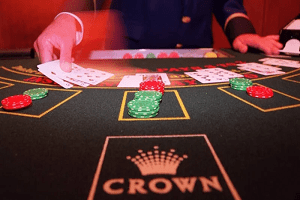 Crown Melbourne patrons will find the casino environment a bit different now, as the Victorian Gambling and Casino Control Commission has decided to change the rules regarding electronic gaming machines at the facility. Major changes were made to playtime and spins in order to help reduce harm among players within the facility.

The Commission decided to make two key changes connected to electronic games. First, players of such games will not be able to play more than one machine at a time. Employees must ensure that players are restricted to one game.

Players are also unable to use an item to hold down the buttons on the machines for continuous play. Such gaming is already prohibited on machines, but players were reportedly using certain items to allow the machines to spin continually.

Changes to the electronic gaming machine rules at the Melbourne casino help the venue fall in line with the Gambling Regulation Act 2003 and the Casino Control Act 1991 regarding responsible gambling objectives. The decision was also made in response to concerns connected to the investigation into the operator’s license by the Victorian Royal Commission.

Allowed to Continue with Operations Despite Investigation Findings

The license of Crown Melbourne, held by Crown Resorts Limited, is still intact, despite the outcome of the investigation involving anti-money laundering issues. The examination into the casino found that the operator has conducted ‘disgraceful’ actions, believing the provider could be guilty of enabling money laundering activity and misleading gaming regulators.

The casino was allowed to maintain its licensing but must operate under supervision for a two-year time frame. The inquiry also endorsed the idea that James Packer release his shareholder interest in the Crown Resorts company to 5% by 2024.

At the time of the investigation outcome, it was suggested that an independent manager be brought to the property to investigate operations, with the authority to direct the board and veto any decisions.

Currently, the Victorian Gambling and Casino Control Commission is evaluating the Royal Commission’s report against the casino and more regulatory action may be presented in the future regarding the Crown Melbourne casino.

The Commission has the authority to create rules regarding electronic gaming machines, which is how the recent changes came to pass. Jason Cremona, the Commission’s Acting Director of Licensing, stated the new rules will help to reduce harm from the machines at the casino.

Cremona pointed out that playing more than one machine is not consistent with the responsible gambling objectives held within current legislation, nor is using items to hold down controls. The Crown Melbourne must ensure that patrons follow the rules and compliance will be monitored by the Commission.